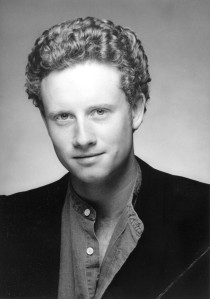 Tenor Hal Cazalet will be performing in the role of Nicholas, Simon Powers’ adopted son and protégé. Horribly injured as a child, Nicholas is rescued by Simon and rehabilitated as a half-human, half-machine. Nicholas builds The System. The role is demanding not only vocally but also in requiring an actor who can convey the cyborg nature of Nicholas in a way that is both convincing and sympathetic.

Here is an excerpt from Scene 5 from Death and the Powers (video footage from rehearsal at Cutler Majestic Theater, Boston, August 2010):

NICHOLAS
One arm of bone and gristle, nerves and muscle—
Mortal, fallible, breakable.
Saved by the idea, saved by the System.

Hal divides his time between the United States and Europe performing in Opera, Musical Theatre and Cabaret. After training at the Guildhall School of Music and Drama he went to the Juilliard Opera Centre, New York where he won the Shoshana Foundation Award.

Past engagements include: Gerard in the World Premiere of Philip Glass’s Les Enfants Terribles at the Spoleto Festival, USA and also at Herod Atticus Amphitheatre, Athens, Charles McCray  in the World Premiere of The Music Programme for Polish National Opera, Warsaw and at the Linbury Studio, Royal Opera House, Covent Garden, title role in the World Premiere of Hercules and the Hydra at the Weill Hall at Carnegie Hall, title role Albert Herring for Glyndebourne Touring Opera, Lysander A Midsummer Night’s Dream and Quint Turn of the Screw for English Touring Opera, Fenton Merry Wives of Windsor for the Buxton Festival, Prince The Love for Three Oranges at JOC in New York, Alfred Clement Let’s Make an Opera at the Aldeburgh Festival, title role Tobias and the Angel at the Young Vic, MacHeath Threepenny Opera at the Theatre Royal, Brighton, MacHeath The Beggar’s Opera for Opera Theatre Company, A Little Madness in Spring by Antonio Vargas for Casa da Musica in Porto, title role in Monteverdi’s L’Orfeo for English Touring Opera, The Magic Flute and the Broomstick for Wigmore Opera at the Wigmore Hall, Belmonte Abduction from the Seraglio for English Touring Opera, Cascada The Merry Widow for English National Opera and Satyavan Savitri, Pierre The Wandering Scholar for the Buxton Festival and Lensky Eugene Onegin for Iford Arts

In the US, Hal made his Lincoln Centre debut performing in the World Premiere of Tristan Keuris’s L’Infinito at the Alice Tully Hall (WNYC live broadcast). He has also performed at the Kennedy Centre, in Washington DC under Christopher Hogwood and the National Symphony Orchestra as Mr Angel in Mozart’s The Impressario and sang in concerts as part of The New York Festival of Song in Merkin Hall. Hal has toured and recorded with the Monteverdi Choir under John Eliot Gardiner. He performed at the Library of Congress in Washington DC with American soprano Sylvia McNair in The Land Where the Good Songs Go, a stage show he devised with pianist Steven Blier based on the songs of Wodehouse and Kern. The show’s popularity led to further performances at The Danny Kaye Theatre in New York and at the Wigmore Hall in London. The album The Land Where the Good Songs Go was released by Harbinger Records in 2001. Hal has also performed in cabaret with Tim Rice, Stephen Fry and Ned Sherrin and made appearances on BBC Radio: Loose Ends, In Tune, and the LBC Pete Murray Show. Hal’s recent recordings include Gerard in Les Enfants Terribles (Nonesuch Records) and two musicals by Kern and Herbert with the London Symphony Orchestra (EMI Records).

Engagements in 2010 include Richard Dauntless Ruddigore for Opera North and Tod Machover’s Death and the Powers in Boston, Monaco and subsequently Chicago.

Amazon.com samples of Hal Cazalet’s performances in The Land Where the Good Songs Go