The distinguished music critic Andrew Porter has published his review in Opera Magazine of Death and the Powers, which he saw at its Monaco premiere last September. Porter has followed composer Tod Machover’s work for decades and brings a wealth of knowledge about Tod’s work and the history of opera generally to this review.

In his New Yorker review of Tod’s first opera VALIS, Porter wrote: “Overcoming prejudices—against the [science fiction] genre, and against operas in which electronic technology is used not just for special effects (as in Musgrave’s Voice of Ariadne, Birtwistle’s Mask of Orpheus)—and knowing from other works that Machover is a remarkable composer, I got round to Valis at last, in 1989, after it had been revised and recorded. And heard what I called ‘one of the brightest and most intelligent of new American operas … no monotony or meagreness of sound … well-shaped, carefully paced acts … variety of texture, tone, intensity’.”

“Death and the Powers, 23 years after Valis, is even better,” Porter writes on. He describes the dramatic story and the production’s ambitious technologies, and adds “But I’d like to stress, not so much the sonic and scenic marvels created by the Massachusetts Institute of Technology’s Media Lab (whose Opera of the Future Group is directed by Machover), as what a good opera composer Machover is, bringing the ‘traditional’, necessary skills to a far from traditional work.” 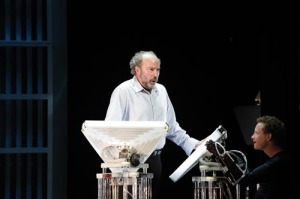 Porter lauds all of the singers and is especially impressed with the final scene between Simon Powers and Miranda: “The final duet is a moving modern addition to the great line of father-daughter exchanges: Boccanegra-Amelia, Rigoletto-Gilda, even Wotan-Brünnhilde.” He concludes: “This was a grand, rich, deeply serious new opera, presented by a team with manifold, coherent accomplishments.”

Read the entire review here and let us know what you think.

3 Replies to “Andrew Porter reviews Death and the Powers”