Tod was in Edinburgh at the end of May to launch ‘Cauldron’, the latest app for his collaborative symphony orchestra project commissioned by the Edinburgh International Festival. He met with hundreds of school kids, was serenaded by bagpipes (which he now professes a new fondness for), and explored the vast network of subterranean tunnels underneath the city. Scroll below for some recent media stories about the project, and check out the Cauldron app! 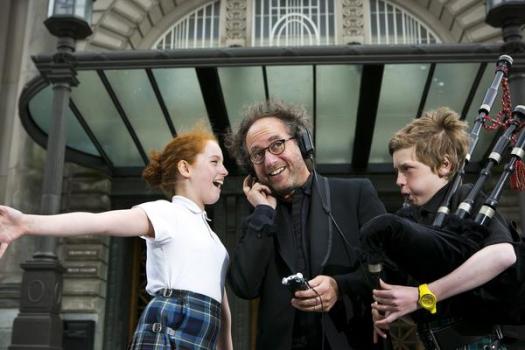 The Scotsman – Sounds of Edinburgh to be used in festival symphony – “Birdsong, buskers, traffic and even tramworks could all end up being part of Tod Machover’s crowd-sourced work, Festival City, which he will work on until just shortly before it is premiered. Billed as a “sonic portrait” of the city, it will be unveiled at the Usher Hall in August in a one-off show to be performed by the Royal ScottishNational Orchestra.”

Boston Business Journal – A score for the world’s biggest music fest? There’s an app for that – “Machover said he said he sees Edinburgh as a divided city, with beautiful, 18th Century architecture on one hand, but the historical backdrop for “Dr. Jeckyll and Mr. Hyde” and J.K. Rowling’s “Harry Potter” Series. He said that while the Toronto project was “like a journey where it ends up pretty classical,” the Edinburgh music will be different, because he’ll be letting the Cauldron – and everything residents stir into it – to determine its flow.  ‘I think this piece may end up being more experimental,” he said. “I don’t want to write a simple melody to tie everything together. What’s going to tie everything together will be the soup.'”

West End Broadway World – 2013 Edinburgh International Festival Launches New ‘Cauldron’ App “With Cauldron we grow closer and closer to the idea of a sonic portrait of Edinburgh. I want Cauldron to give users a feeling akin to standing on top of Arthur’s Seat and absorbing the entire city at once. Having spent time working the RSNO and different school groups across Edinburgh, I’ve been directly inspired by their enthusiasm and energetic input, and am excited to share further the sounds created through Cauldron’.”

Thoroughly Good Blog – Submit material for Tod Machover’s Edinburgh 2013 commission Festival City – This blogger tried out the Constellation and Cauldron apps and offers helpful tips on how to play with them. We’re very happy to know that “seeing and hearing my finished mini-score was a joy to behold both visually and aurally.”