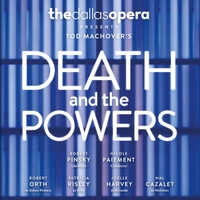 A DVD of Dallas Opera’s highly successful 2014 production of Tod Machover’s robotic opera, Death and the Powers, is available beginning April 22 through the MIT Media Lab. Only a limited number of copies are on sale and can be purchased at CD Baby here.

Death and the Powers received its world premiere September 24, 2010 at L’Opéra de Monte-Carlo – Salle Garnier. In addition to the Dallas Opera production, Machover’s opera has been performed at Chicago Opera Theater and at Boston’s Majestic Theater, a joint production with Harvard’s American Repertory Theater and the MIT Media Lab. The work was named a 2012 Pulitzer Prize Finalist in Music for both its score and the innovative technology created by Machover and his Opera of the Future Group at the MIT Media Lab.

“Death and the Powers doesn’t point the way to a new era of opera. It’s there. Now.” Philadelphia Inquirer

For more reviews of Death and the Powers, click here.